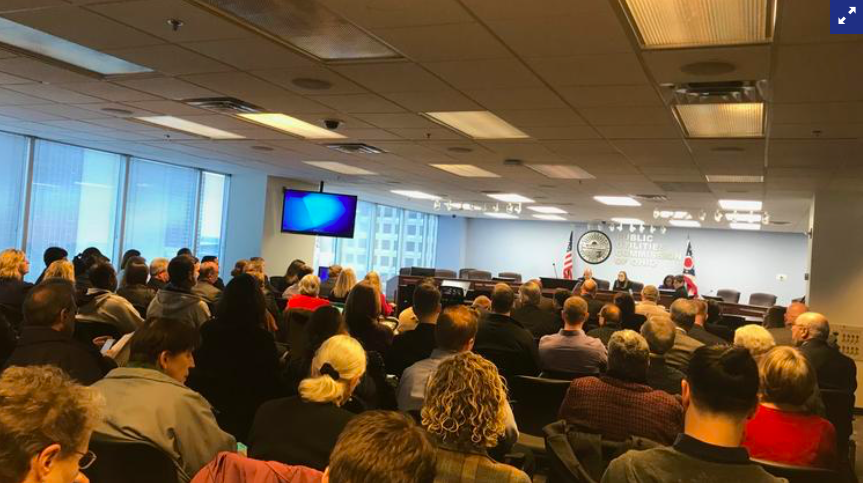 Business, construction and development leaders across Appalachia are rallying in support of AEP’s plan to build the largest solar farm in Ohio history.

If completed, the Highland Solar Farm be the state’s largest.

At the packed meeting, economic development leaders said the project could see investment in a part of the state that just this year was hurt by the closure of two coal-fired power plants. About 50 residents and community groups spoke during the meeting Tuesday morning.

“This is bigger than AEP. This could really be a landmark case for Ohio solar energy,” Marc Reitter, AEP’s vice president of regulatory and finance, told me at the meeting. “This could be a catalyst for economic growth in an area that … has seen disinvestment.”

AEP says constructing these facilities would bring $24 million in new state tax revenue and $6.7 million in local tax revenue, with Ohio materials being preferred to source the project. Construction also would support 4,000 jobs, including 113 permanent manufacturing jobs in the solar supply chain.

The utility, which serves 1.3 million residential and 200,000 commercial customers in the state, says it plans to develop 900 megawatts of renewable energy production in the state as part of $33 billion in infrastructure work.

“We are routinely running into barriers attracting commerce and foreign firms because of a lack of renewable energy available,” said John Molinaro, president and CEO of the Appalachian Partnership Inc., a Nelsonville-based economic development group.

“Most e-commerce and (foreign direct investment) require renewable energy. We lose those opportunities when we can’t provide that.”

The area has been hit especially hard by economic decline recently. A county away, Dayton Power & Light Co. closed J.M. Stuart Station and Killen Station in Adams County. Coal company Murray Energy Corp., which supplies the plants, estimated those closures cost $26.5 billion in economic losses to the state and 19,000 jobs in the plants as well as the economy supporting them.

The closures also brought national media attention to the plight of Appalachia.

“It seems difficult today for us to reach across ideological divides, but for encouraging investment to an area in so much need, it feels pretty good to do that,” Daniel Sawmiller, Ohio energy policy director at the Natural Resources Defense Council, said before the meeting.

This fall, FirstEnergy announced plans to close its last coal-fired plants in Ohio and Pennsylvania.

“There is good news on the horizon for the (solar) project – good news they frankly haven’t had much of the last several decades,” said Matt Evans, president of coal marketer Boich Cos. “Columbus has ignored this part of the state for the last several years and it’s time to give some good news to Appalachia.”

AEP predicts the development of the wind farms will raise customers’ bills by about 28 cents for the first year. But the construction would effectively be a fixed 20-year rate that it estimates would bring customers $218 million in savings over the life of the solar farm.

AEP’s $4.5 billion plan to build the largest wind farm in the U.S. was shot down earlier this year after Texas regulators said there wasn’t enough evidence that the raised costs offered clear benefits for ratepayers.

The projects, developed by Hecate Energy Highland LLC and Willowbrook Solar LLC, respectively, would be operational by the end of 2021, following regulatory approvals, AEP said in the filing.

PUCO commissioner M. Beth Trombold said the case is being continued until Jan. 15, with movement on the proposal expected next year.